Grave Of The Fireflies 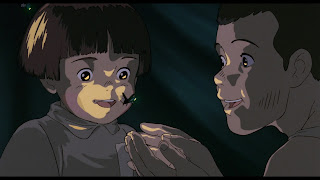 Directed by Isao Takahata
Produced by Toru Hara
Studio Ghibli
Distributed by Toho
Release date-16 April 1988
Running time- 89 minutes
Grave of the Fireflies is a 1988 Japanese animated war film based on the 1967 semi-autobiographical short story of the same name by Akiyuki Nosaka. It was written and directed by Isao Takahata, and animated by Studio Ghibli for the story’s publisher Shinchosha Publishing. Set in the city of Kobe, Japan, the film tells the story of two siblings, Seita and Setsuko, and their desperate struggle to survive during the final months of the Second World War.
It’s one of the saddest anime movies I have watched so far. I would List it 2nd in my list, obviously after Anohana.
In the ending scene, you will definitely feel it. Also, you will get a life lesson from this movie.
Don’t believe me, just watch it and thank me later on.
Download Grave of the fireflies 720 ps SUBBED (303 MB)