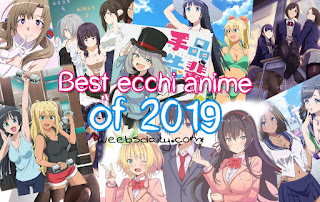 To be honest with you guys, I made this list on the basis of the anime I have watched. If I missed putting some anime then please correct me in the comments below.

Also, don’t be confused with the Ecchi and Harem genre, they are totally different things.

7. How heavy are the dumbbells you lift?

Release date: July 03 – September 18
(Summer Anime 2019)
Episodes: 12
Director: Mitsue Yamazaki
Studio: Doga Kobo
Synonym: How Many Kilograms are the Dumbbells You Lift?
‘How Heavy Are Your Dumbbells‘ is a pseudo-educational anime that features cute girls in Ecchi situations. Hibiki Sakura, the main protagonist of the series, is a gluttonous high school teen who gets really concerned about her expanding waistline. After she fails to work out alone at home, she decides to join a nearby gym and starts working out with school idol Akemi Souryuuin and a hotshot gym-trainer.
Apart from all of its ridiculous gags and fanservice, ‘How Heavy Are Your Dumbells’ also has a decent production value. It is the kind of anime that you’ll enjoy a lot more than you would initially expect, so if you haven’t seen it yet, you should check it out Funimation.

Release date: October 28 – January 07
(Fall Anime 2019)
Episodes: 12
Director: Hiraku Kaneko
Studio: TNK
Kandagawa Jet Girls is an Ecchi sports anime that revolves around the life of young high school girls who compete in a Jet Ski tournament.
To add to its overall appeal, it also brings in sci-fi elements and some extremely voluptuous female characters.
From a fanservice standpoint, ‘Kandagawa Jet Girls’ is easily the best in the game but if you’re looking for an inspiring tale of underdogs who make their way to the top, you’re barking at the wrong tree with this one. For pure Yuri lovers and also for the ones who dig anime with cute girls doing cute things, ‘Kandagawa Jet Girls’ is highly recommended.

Release date: July 08 – September 23
(Summer Anime 2019)
Episodes: 12
Director: Itsuki Imazaki
Studio: Seven GEEKTOYS
Synonym: Would you love a pervert as long as she’s cute?
Keiki Kiryuu, like all the boys of his age, desperately wants a lovey~ dovey~ romanceful life, a girlfriend.
And his yearnings for a lover finally come to an end when he receives a love letter from a mysterious girl, along with a pair of panties. Now it’s on him to find out who his “Cinderella” is that left this secret message to him. As he sets out on a quest to find out the true identity of his lover, he comes across many other girls from his school. Now here the beautiful ecchi-harem adventure of our hero begins who meets with different girls of his school who kind of looks holy and innocent, but deep inside, they all have a wilder side waiting to be unleashed.

Release date: May 11 – July 27
(Spring Anime 2019)
Episodes: 12
Director: Yuki Ogawa
Studio: Yokohama Animation Lab
It’s not just Ecchi, but almost all genres of anime have these fixed sets of cliches that are repeatedly used in almost every show. Harems where the main male character gets a whole lot of attention from his female peers and an emphasis on curvy anime girls, that’s what all these Ecchi anime shows are all about, but ‘Miru Tights’ is a breath of fresh air to be taken. In fact, despite its short runtime, I would say that ‘Miru Tights’ is easily a masterpiece because of how it deals with deeper themes.
It brings in a beautiful storyline that deals with discrimination, freedom of speech and many other informative subjects that completely engross you into the lives of its characters. So, with this one, it does not really matter if you’re an Ecchi fan or not, you will certainly fall in love with it.

Release date: July 02 – September 17
(Summer Anime 2019)
Episodes: 12
Director: Fumiaki Usui
Studio: LIDENFILMS
Synonym: Magical Sempai
When a high school freshman is forced to join one of his school clubs, he looks for one that involves minimum participation and that’s when he meets the president of Magic Club, Tejina Senpai for the first time.
After slipping into the magic clubroom of his school, he meets the beautiful upperclassman Tejina who suffers from stage fright and often lands herself in the most embarrassing situations. But even after knowing that he does not belong there, the young boy, out of pity, decides to become her assistant and enjoys the moments with his senpai.

Release date: April 8 – June 24
(Spring Anime 2019)
Episodes: 12
Director: Hiraku Kaneko
Studio: Tear Studio
Synonym: Why the hell are you here teacher?
17-year-old Ichirou Satou is in no way a perverted high school kid and he does not even intend to be one. But somehow, he ends up finding himself in the most perverted situations with his extremely attractive teacher, Kana Kojima. Besides Satou, there are 3 more male protagonists who fell in the same situations as Satou does.
Believe me, this series is super exciting and fan-service is at it’s extreme.

I hope you enjoyed our countdown of the best ecchi anime of 2019.
Stay tuned to read more interesting articles like this. And you can download the best quality anime Theme Songs and OST as well from our very site.

Power ranking of the Pillars(Hashiras’) from Demon Slayer